The Age of Exponential Organizations (ExO): Why traditional businesses need to evolve right now (and not tomorrow)

ExO Attributes: the 11 key elements to build an Exponential Organization Sep 24, 2019
Do you have an MTP? Your first step to exponential growth Nov 04, 2019
Five steps to designing an exponential business model Oct 09, 2019
The leadership mindset of the 21st century Mar 27, 2020
The rise of the Exponential Organisation: 10X better, faster and cheaper Oct 08, 2019
Categories | Popular
Written by Francisco Palao Reines
on September 05, 2019

As Heraclitus of Ephesus (a pre-Socratic Greek philosopher) said more than 2,500 years ago, “the only permanent thing is change”. And since then, everything has been evolving. However, nowadays everything changes faster than ever. Why? Because we are living in a technological revolution, which has an impact on every area of our lives, business and society.

In 1965 Gordon Moore (CEO of Intel) predicted that the number of transistors in a microprocessor doubles about every two years, which happened to be right and it’s nowadays known as the “Moore’s Law”. The impact of this is that the performance of computing technologies evolves in an exponential way. That means that every second year the performance of computing doubles, which provides us with an exponential growth (e.g. 1, 2, 4, 8, 16, 32, 64, 128, etc.).

An example which explains the relevance of exponentials. If the average person moves forward one meter ahead with each step, that means that if the person moves 30 steps, they will move forward 30 meters. Easy. However, let’s imagine that each step was exponential, meaning that the first step would be 1 meter, the second step 2 meters, the third step 4 meters, the fourth step 8 meters, the fifth 16 meters, and so on. The final result of 30 exponential steps would be more than one billion meters (1,073,741,824 meters), which would be more than 84 loops to the Earth. Who could guess the result of the exponential steps as we did for the linear ones? The issue is that our brains work very well with linear progression, but we can’t predict exponential.

Going back to Moore’s Law and how computing performance grows in an exponential way, this is the reason why we all carry mobile phones which are so much more powerful than the computer that took the Apollo XIII to the Moon more than 50 years ago. What will computing power be like in a few years? No one can tell, but it will be more powerful than anyone could ever have imagined.

On top of this, Ray Kurzweil (American inventor and futurist, and also co-founder of Singularity University) extended Moore’s Law with his “Law of Accelerating Returns”, according to which the rate of change in a wide variety of systems, including all types of technologies, tends to increase exponentially.

Nowadays, there is a new set of exponential technologies emerging that we never had before, such as Artificial Intelligence, Robotics, 3D Printing, Drones, Biotechnology, and many more. The performance of these technologies are doubling every two years (or so) according to the Law of Accelerating Returns and are impacting not only our daily lives but also every industry. 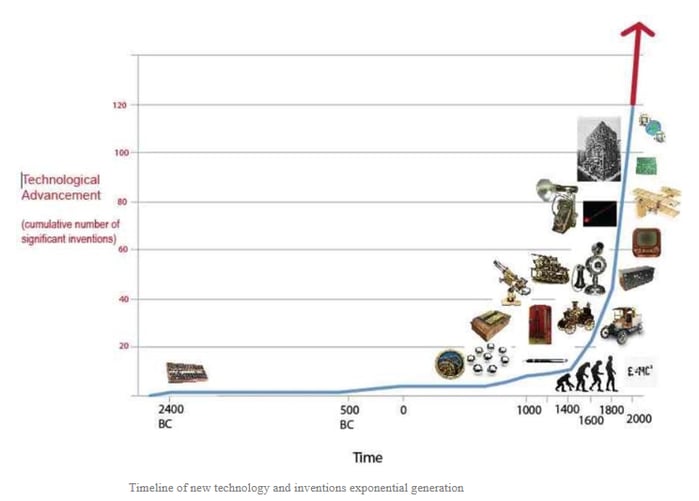 In fact, according to the World Economic Forum, we are officially at the early stages of the Fourth Industrial Revolution, which is happening because of the combination of all these exponential technologies that are emerging at the same time.

As we saw before in the example about exponentials, it’s really difficult to predict what will happen in the upcoming years, but we can try to understand the dynamics that exponential technologies are generating and the implications they have in our lives. In the book “Bold”, Peter Diamandis and Steven Kotler described the chain reaction of technologies with the 6D’s, which are the different phases that any domain go through when we apply exponential technologies to it: First of all everything becomes Digital, after that we face a time of Deception, eventually everything gets Disrupted, costs go down and we experience a huge Demonetization and also a Dematerialization of product and services and, finally, all technologies arrive to everyone and we see the most powerful effect of all of them: Democratization. Actually, democratization of technology is the cause of the two main reasons why exponential technologies are forcing traditional organizations to evolve into something new. Let’s see both.

First, democratization of technology is removing entry barriers for new competitors, not only for existing tech companies, such as Google, Apple and Amazon; but even for young people with new ways of thinking. We are living in a time where what used to be accomplished by nations or large organizations, is now being done by individuals.

There are several cases of young people who are making great impact because they have access to resources and technologies that we didn’t have before. A great example is Jack Andraka, who discovered a new method for detecting early stages of pancreatic cancer just by researching Google when he was just 14 years old. This new method is thousands of times cheaper and over 90 percent more accurate than the previous alternatives. Another great example is Danit Peleg, a 20-year-old student who created her own 3D-printed fashion collection at home. Now she is showcasing her designs at international fashion shows and disrupting an entire industry. 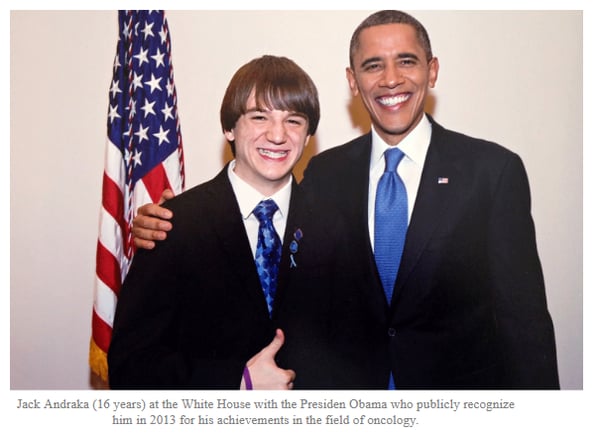 Second, democratization of technology is generating a new age of abundance, which is disrupting most of the current business models that are based on selling a scarce product/service. As Peter Diamandis and Steven Kotler described in the bestseller “Abundance”, with the emergence of exponential technologies, nine billion people have access to clean water, food, energy, health care, education, and everything else that is necessary for a first world standard of living. Now, we see how companies that used to have a business model focused on scarcity are being disrupted by these new types of organizations that have a business model that leverages abundance.

For example, the main reason why Kodak was disrupted with the emergence of digital photography was that while it's business model focused on selling a scarce resource (films with 24 or 36 photos), the digital revolution generated a new landscape where the user could take an abundance of photos, and for free. On the other hand and at the same time, Instagram developed a new business model leveraging the new abundance scenario. The more pictures people can do and share, the better for Instagram’s business model. That’s the reason why, at the same time that Kodak was going bankrupt, Instagram was acquired by Facebook by 1 Billion USD in 2012 and also with 13 employees. And remember, Instagram was also founded by two twenties, Kevin Systrom (27) and Mike Krieger (24) in 2010. In 2018, Kodak revenues were $1,3 Billion USD, while Instagram revenues were $9 Billion USD.

As it happens with evolution in nature, businesses also need to evolve and adapt in order to keep their position in the market. In upcoming articles, we will describe the ExO model and how to evolve an existing organization into an ExO, as Salim Ismail, Michelle Lapierre and myself, Francisco Palao, described in the book “Exponential Transformation: Evolve your organization (and change the world) with a 10-week ExO Sprint“.

For now, let me give you three easy next steps to start your evolution, either as an established business or as an entrepreneur who wants to launch a new one:

As we saw before, predicting the future is not possible in the age of exponential technologies. So as Abraham Lincoln said, “the only way to predict the future is by creating it.'' Just do it wisely and take into account what many other successful Exponential Organizations have done in order to lead this new age.

Now the question is the following: As a business leader, what are you doing, if you are not creating one of these ExO’s?