ExO Attributes: the 11 key elements to build an Exponential Organization Sep 24, 2019
Do you have an MTP? Your first step to exponential growth Nov 04, 2019
Five steps to designing an exponential business model Oct 09, 2019
Why you need an ExO Sprint Nov 22, 2019
The rise of the Exponential Organisation: 10X better, faster and cheaper Oct 08, 2019
Categories | Popular
Written by Sebastian Sjöberg
on June 19, 2020

We are Sebastian Sjöberg and Fredrik Andrén, who together form 10X Labs - a boutique innovation lab at the edge of Sweden in the city of Karlskrona. Since 2014, and with the original 'Exponential Organizations' book as a cornerstone, we have been teaching corporate clients how to thrive in times of exponential change. We achieved our Open ExO coach certification late last year and on Monday March 30th we launched our second full-fledged sprint together with a local client, viruses be damned. 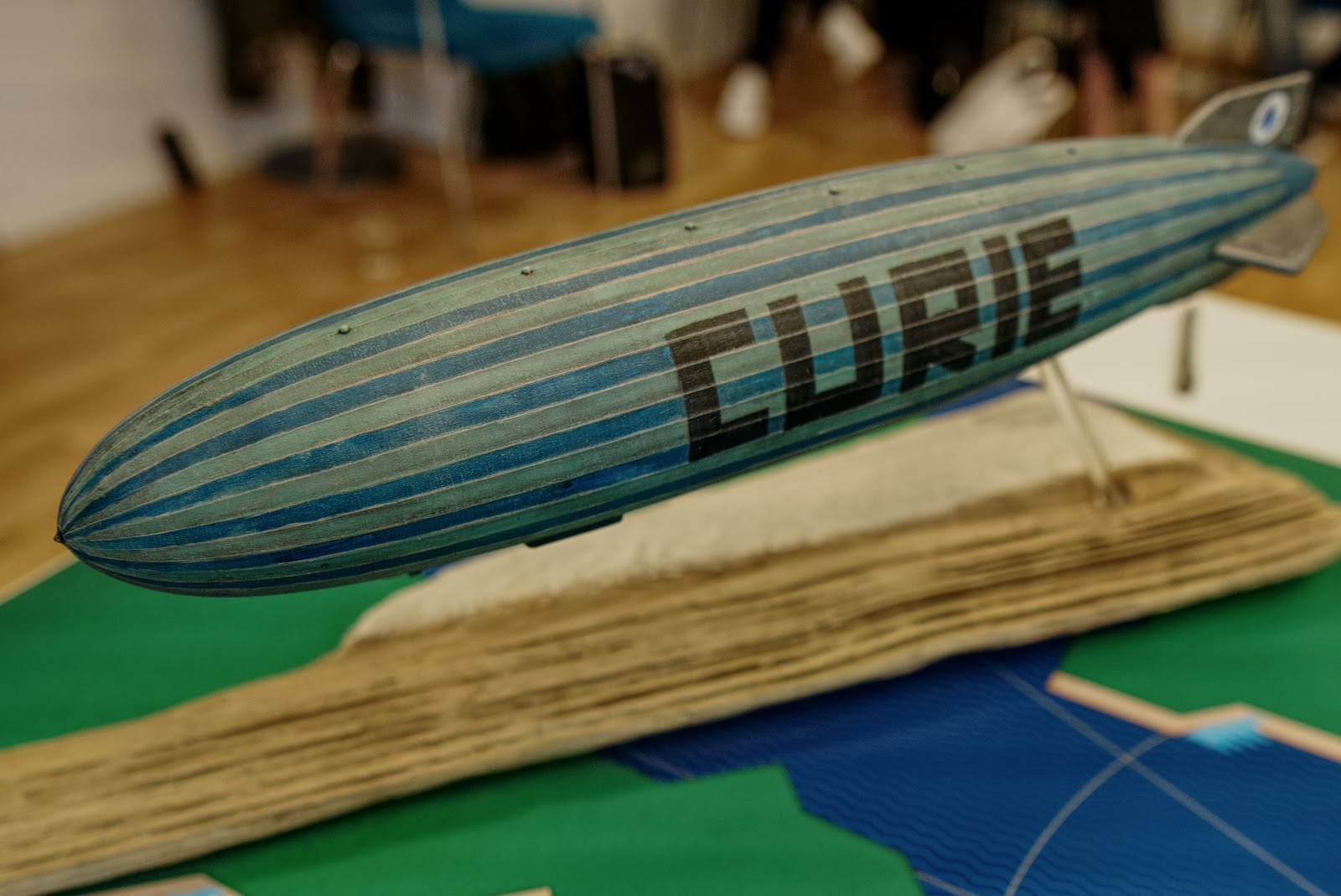 A model, in feeling and in form, of the now concluded sprint

How to land a Zeppelin

First of all, it is harder than it should be to sit down and write a reasonably coherent sprint log every week. It’s a month since we last did so, a month of relentless work towards bringing our sprint to its optimal conclusion. Or, as we like to put it, bring the vessel carrying Expedition Curie back to port and perform as gracious a landing as possible.

As we are all aware, our world is now experiencing the immediate impact and ongoing effects of palpable exponential changes. 2020 started with wildfires in Australia, was then consumed by a global pandemic and is currently defined by social unrest in the US and beyond. Whether or not we are actively touched by these and other forces, they provide a vivid context to all the other things we do. That has certainly been true for Expedition Curie and for us as coaches.

At the end of the day, or rather at the final presentation of a sprint, we believe that the quality of the initiatives is the second most crucial factor. The ultimate challenge is whether or not the teams can explain why their company should invest its focus into this one particular thing. Especially when there are ‘more pressing and immediate concerns’ demanding attention. It comes down to blending convincing storytelling with accessible business intelligence so that the CEO and executive suite can judge the initiative in its natural habitat.

In our case, the single most important factor for whether an initiative is anointed with further funding is the degree of intention that the team members imbue their presentations with. Do they truly mean what they say, when they say these bold statements about the possible future? Crucially, do they want to embark on the intrapreneurial journey it takes to build these new things? When the sprint is over, are they willing to carry on without the same coaching support and curriculum? 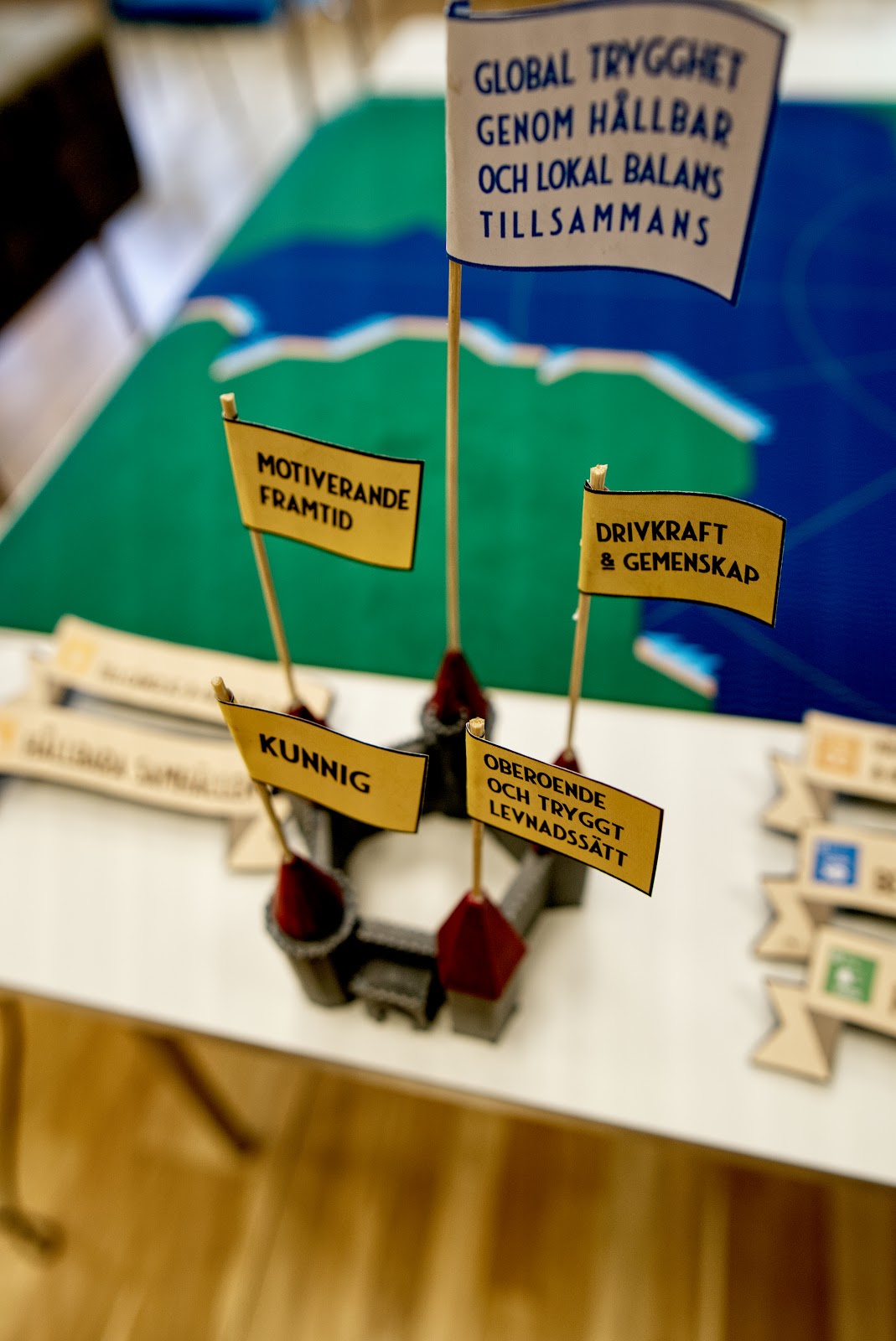 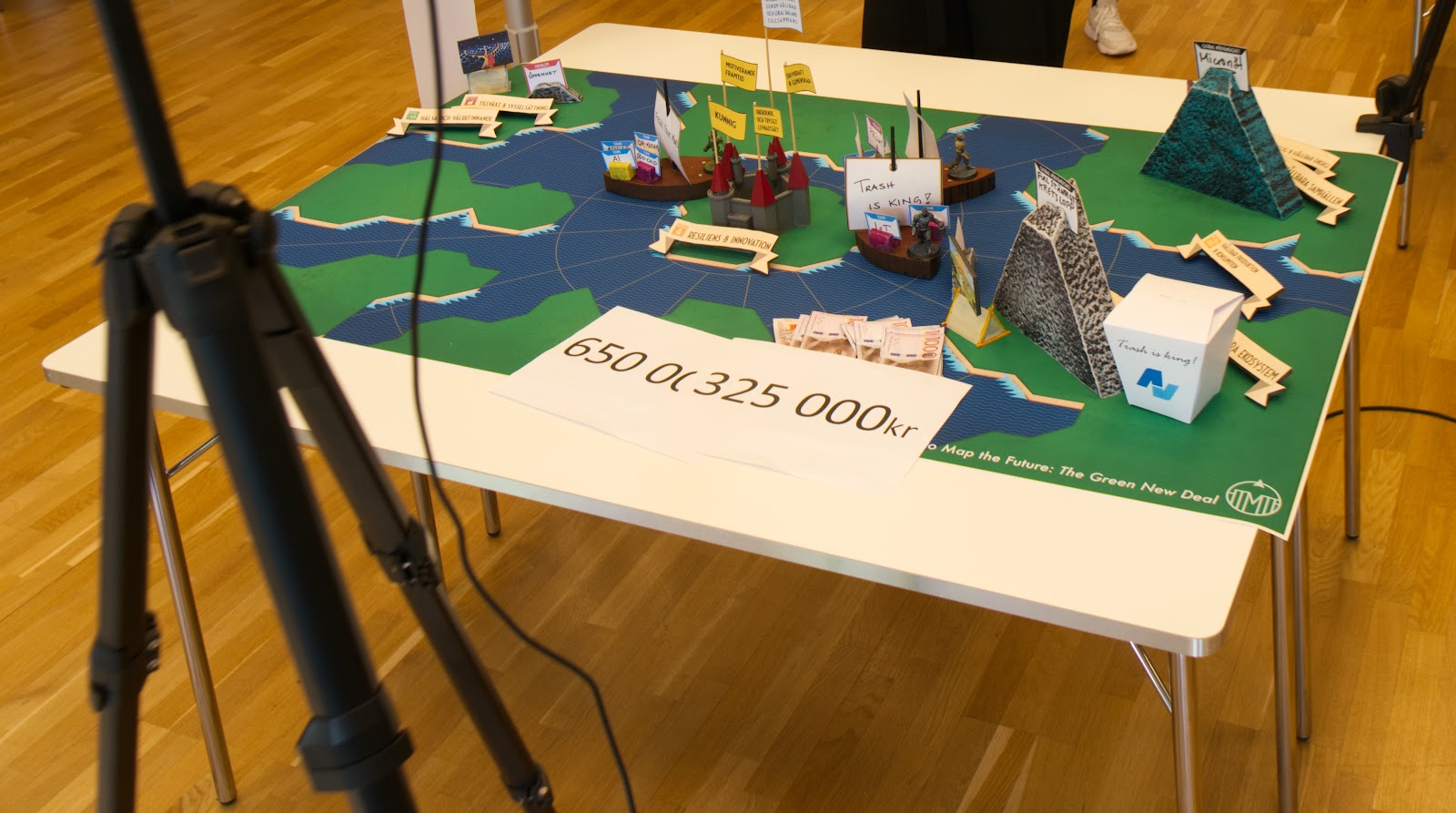 Ships, representing the continued work of our innovation teams, lie ready to set sail (receive more funding). At the horizon there are new continents to settle and a global conversation to be joined

For those of you that have gotten some insight into our work you know that we have developed a strategic planning tool called How to Map the Future. This was the device by which we presented all of our work. Every aspect of the sprint had some model or gamified token to represent it, and the teams used these tools to tell a story about where their initiatives originate from and where they are going. The field research from week 1, the decisions made in week 5, the refined insights during the latter half of the sprint and ultimately their actual proposals for continued innovation. 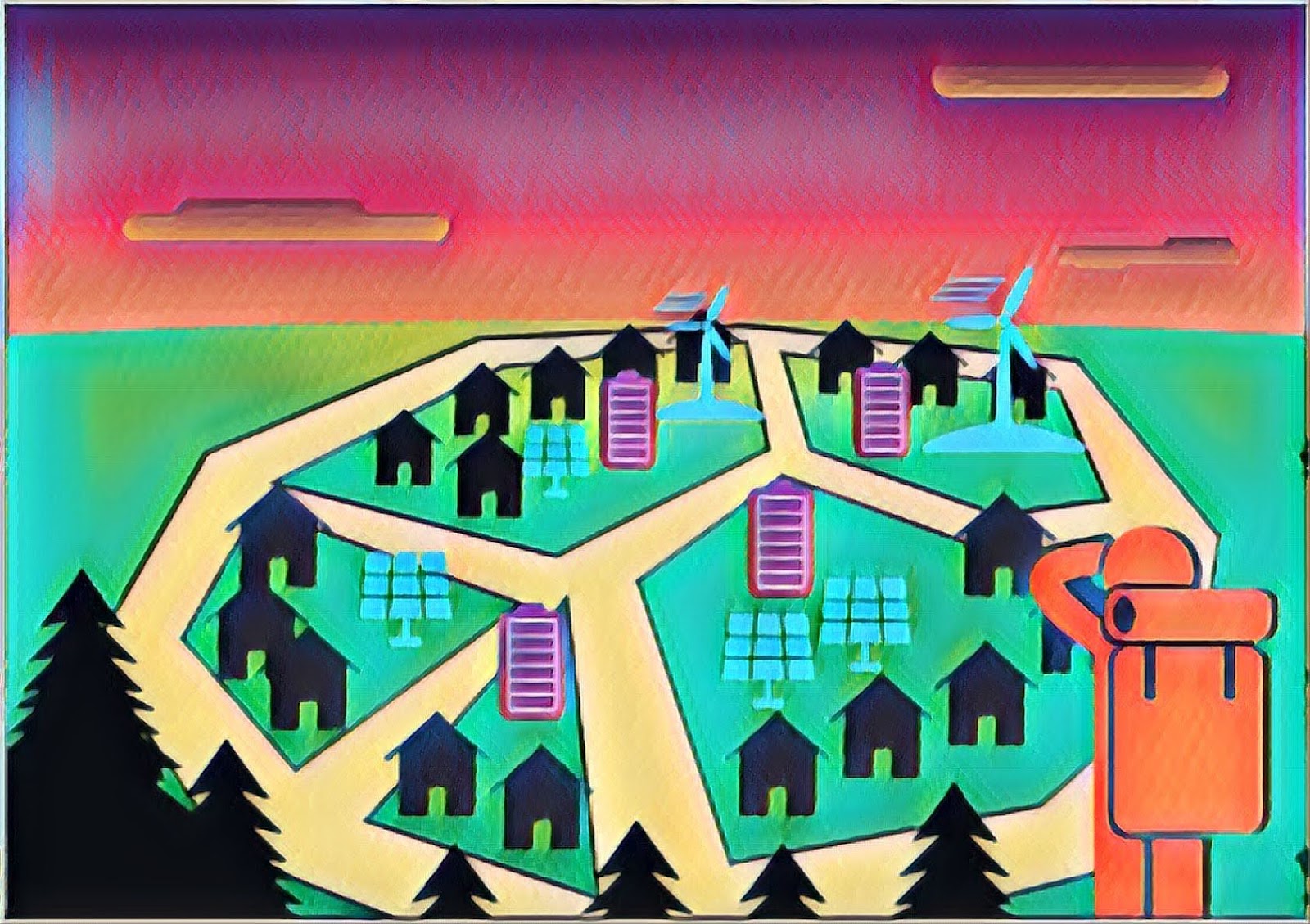 A vintage postcard from a future where resilient microgrids define the new normal. Yeah

We introduced the idea of writing postcards from the future, addressed to their CEO and sprint sponsor in the present. Thematically, these postcards (three in total) were sent from new settlements (products and services to be built) that the teams had envisioned to be possible and meaningful to create. This format enabled our participants to truly paint a rich vision of what could be achieved, and in a theatrically satisfying way hand this over to the sprint sponsor.

The actual initiatives we depicted as ships equipped with all the essentials to make it the new shores from which the postcards were sent. These vessels carried everything the crew might need: technologies, a proposed business model, ExO attributes, customers and most importantly staff (themselves, those who decided to do so). All of these concepts had been modelled in different ways and could be placed onboard each ship, as the teams told the stories of their initiatives. It was, if we may say so, very effective from a pedagogical and dramaturgical standpoint.

Finally, the CEO were given the choice of which vessels to order out to sea (representing the ordeals of actual innovation). Naturally we provided more conventional text material to go along with our How to Map the Future exposé, for her to absorb and use to make informed decisions. In the room it was only her, us coaches and the nine participants. Online, the entire executive suite and then some attended the presentation. New times, new rules. Next week she will announce which of her newly built innovation ships that will sail. We are confident that at least one will be endowed with this promise and the responsibility that comes with it.

As mentioned above, the most crucial metric for success of this sprint was whether or not enough of the participants would want to continue working on their initiatives. We as coaches will be judged by whether or not this Expedition did awake the entrepreneurial spark within at least some of the explorers. As you know, not everybody wants to invent their own job and navigate the trenches of unknown territory. And as you also know, companies have plenty of good ideas already. What they lack the most are people willing and able to build things that do not yet exist but should.

So did we succeed, in sparking the flame within the people that joined this sprint? I believe we did. 10 people embarked on this journey, 9 of them finished it. Out of these, three of them spoke with conviction and intention when they placed the crew token onboard their respective ships. Another three would like to join the journeys, provided that these leaders go with them. The other three did not want to carry this amount of ambition on their backs, and I would surprised if their initiative gets off the ground with any capacity for exponentiality. That is at least a 3X improvement from last year’s sprint, and something we can be content with.

The purpose of writing this sprint log has been to document the trials of conducting innovation work during an especially harrowing time. Perhaps this series of texts has been of some value for other sprint runners within the Open ExO community. It certainly has been valuable to me and my colleague Fredrik, just to consolidate our thoughts almost every week. For some of the participants the past ten weeks have been truly transformational, and acutely relevant given the whirlwind of change we are all experiencing right now. For others, Expedition Curie was too much to handle and they either chose to step off or not rise to the level of ambition that the pursuit requires. The major challenge for us as coaches has been to convey with clarity both the essence behind and practicality of the various exercises. The first half of the sprint was done almost entirely via Zoom, and it worked poorly. The latter part of the Expedition was therefore conducted in the physical space as originally intended, with various social distancing workarounds that often made for often hilarious behaviours.

In conclusion, the work that we do within 10X Labs and the larger work done by the Open ExO community at large have never felt more relevant. This was echoed by our participants as well as by their CEO. The initiatives may or may not bear fruit, but the moral boost and cultural shift that are the effects of performing actual innovation are as palpable as they are hard to measure. It feels important to do what we do, and by that I mean all of us here within this community, right now.

Come September, we embark on a new journey with Expedition Newton. Upwards and onwards on wind of pragmatic optimism!

This post was initially published in the OpenExO Community Circle and is part of an entire series by Sebastian and Fredrik documenting their journey. You can find all of the posts below: