Exponential Organizations: ExOs that failed and what we have learned

¿Qué nos depara 2020 a nivel tecnológico? Nov 25, 2019
ExO Attributes: the 11 key elements to build an Exponential Organization Sep 24, 2019
The Age of Exponential Organizations (ExO): Why traditional businesses need to evolve right now (and not tomorrow) Sep 05, 2019
The power of the ExO Certifications: The value and the new services you can expect Sep 25, 2019
Five steps to designing an exponential business model Oct 09, 2019
Categories | Popular
Written by Salim Ismail
on November 26, 2019

Emerging technologies and the rise of the experience economy are ushering in a new area in business. Every individual can now genuinely make a difference to the world and make an impact that was traditionally a luxury only afforded to governments and large organizations.

In my book Exponential Organizations: Why new organizations are ten times better, faster, and cheaper than yours (and what to do about it), I talked about the failure of Eastman Kodak. The familiar and simplistic narrative served up by the media was that this once-great company had grown complacent and lost its innovative edge. But it was much more than that.

The real cause of Kodak's demise can be attributed to a revolutionary technological change coming at it from multiple directions. Every area of its business model was under attack: cameras, film, processing, distribution, retailing, marketing, packaging, storage, and a radical change in the perceptions of the marketplace. That is the very definition of a paradigm shift.

The Kodak story highlights that nothing remains the same forever, and the startup era is no exception. Exponential Organizations (ExOs) might be seen as the new kids on the block, disrupting entire industries by scaling as fast as exponential technologies. But yes, even ExOs fail too. It's what we learn from these failures that will reshape our future.

A massive transformative purpose (MTP) is absolutely necessary for ExOs that are serious about succeeding where so many have failed. If you take a look at the right side of the diagram below, you can see all of the externalities. Staff on-demand highlights how Uber is not hiring its drivers and how Airbnb is leveraging other people's assets. By contrast, on the left, we have a whole set of internal mechanisms that we use for the control framework and to drive culture. 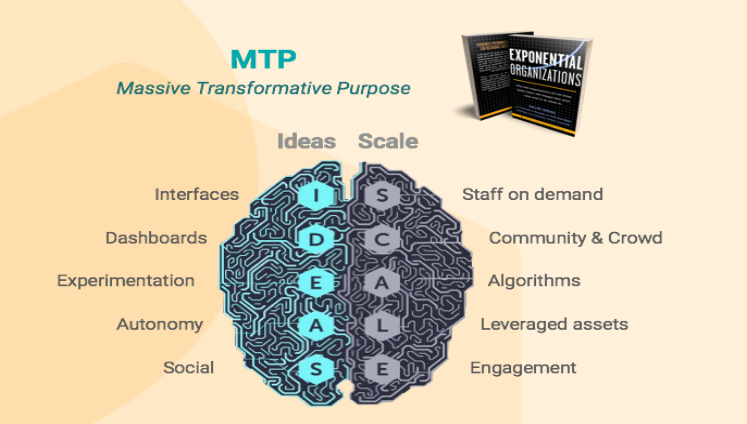 The big takeaway from this diagram is that ExOs need to embody an MTP and at least four out of the ten attributes. Being an ExO allows you to be agile and integrate tech within the speed of its innovation. This gives you a distinct advantage over your competition. But you also need to be in a constant state of awareness and avoid complacency at all costs. Never forget that these exciting new exponential technologies will become democratized and available to everyone who also wants to make a difference.

Traditionally, the odds have been stacked against startups. But, because ExOs are purpose-driven, they dramatically improve their chances of success. Sure, an ExO can fail like anything else but because so much of the organization is externalized, the cost is extremely low.

The need to have grit, dig deep and overcome both failure and rejection should not be underestimated either.

In the fast-moving world of tech, it's easy to forget that two guys with laptops created Google. But, when Larry and Sergey first started pitching Google against 12 other successful search engines in the early days of the internet, 350 presentations ended in rejection. What would our world be like today, if what--they'd stopped at 345? And how many other founders have accepted failure when they were on the cusp of success?

The problem is that we are all guilty of showcasing the success stories of Google, Amazon, and Facebook. But we seldom shine the same light on the 15 times that the founders failed trying to get there. One of the key characteristics of any founder is persistence and ability to avoid many of the obstacles ahead by remaining faithful to its massive transformative purpose.

There are many classic reasons why ExOs fail, such as running out of money, scaling too quickly, or a significant competitor comes along. But over the last 5-6 years, we have noticed some characteristics unique to ExOs:

When talking about the success and failure of ExOs, we should also talk more about the role of luck. If you catch any successful founder in an authentic moment and ask them the secret to their success, many will reply, "We got lucky." Being in the right place at the right time with the perfect feature footprint or market dynamics should not be underestimated.

For Skype to be successful in a market where there were 20 other similar models, it requires a little luck as well as an MTP. Uber has a very similar success story, where the planets appeared to align the time of their launch, and when their users and drivers were looking for new solutions to old problems.

However, I am noticing several changes in the world today that will dramatically affect the future success and failure of start-ups. Back in the 90s and 2000s, the early days of Yahoo!, Google, eBay, and Facebook consisted of lock-in effects on the supply side and demand side.

For example, the rise of the first big tech companies created one e-commerce play in a world where there was only one search engine and auction site. Facebook quickly built a protective moat around its business model, and Amazon homed in on customer service while also creating virtual monopolies that secured both the demand and the supply.

I’m observing that as you move into the physical world, you can no longer lock in the supply side. Almost every Uber driver also has a Lyft badge in their car.  The minute a city allows scooters, 20 brands litter the street corners.

Traditional companies could quickly take back an enormous advantage over their smaller competitors. If BMW created a scooter company, the brand alone will help it succeed over the others. We might be living in a digital mobile-first world, but we could see a return to more traditional business success metrics. I will be monitoring closely how this powerplay will pan out. But founders need to understand that they can't address the supply side in the same way.

Finding the right people to help you on this journey also represents a challenge and opportunity in equal measure. Sebastian Thrun once told me that imagination is ten times more important than experience. Finding somebody that's done it before could mean that they've probably been doing it the wrong way for a long time and bring that into your company. But the secret sauce is in finding a fresh approach and invite your community to help you move forward.

Making an exponential organization successful is not for the faint-hearted. By identifying failure modes early on in your journey can ensure that you do not make any unnecessary mistakes. The odds are already stacked against you. But I urge you to aim for Mars and dare to solve the crazy problems on your purpose-driven mission. After all, that's the only way you will build a transformative exponential organization.  And if you fail to reach Mars and only reach the moon, guess what, that’s pretty amazing in its own right.

If you have any examples of ExOS that failed or have any insights and lessons learned that you would like to share with me, please comment below.